Van Siclen Stocks & Firkins (VSF) handles many high-profile cases. We regularly pioneer changes in the law, influence ongoing media coverage, shed light on key issues and achieve significant settlements and verdicts for our clients. We don’t shy away from tough cases and in some instances we have even helped to create new laws that protect both our clients and their communities.

The cases below signify the type of aggressive, determined and driven representation you can expect from the attorneys at Van Siclen, Stocks & Firkins.

Our firm was hired by a grandmother on behalf of her grandchildren to investigate the numerous failures of CPS to protect her grandchildren. Our firm investigated and discovered that CPS had failed to properly investigate a number of abuse reports from family members and neighbors regarding the children.  In the interim, the children continued to be sexually, physically and emotionally abused.  We filed lawsuits on behalf of the children. The Superior Court dismissed the lawsuit, so we appealed. The Court of Appeals reversed and remanded the case for trial.  Our firm hired the foremost experts in the field, and just before trial, the State settled and paid substantial sums to each of our clients.

Opinion of the Court of Appeals, Division III. 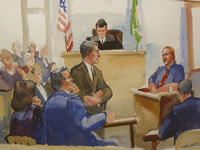 VSF fights on behalf of clients – cases help shape legislation for DSHS
In 1994, Bob Van Siclen and John Stocks were the first private attorneys willing to look into the now notorious “sex ring” cases. When the firm began its representation of two families, there was widespread hysteria in the community and our clients were being tried and convicted in the media before their trials.

Because of our aggressive and tireless investigation, the firm’s representation resulted in the first acquittals in the ordeal. Our firm joined forces with the Innocence Project Northwest. We were able to achieve the release of nearly all of those falsely accused, thus completely discrediting law enforcement’s investigations and turning the tide of public opinion.
The firm went on to file significant lawsuits on behalf of many of those wrongfully convicted, or harmed by the improper work of CPS and law enforcement. Our work resulted in changes in the law protecting the rights of individuals. Our work also resulted in substantial settlements and verdicts for those who had been wrongfully arrested or convicted. We also uncovered documents that had been hidden by the City of Wenatchee. The Court of Appeals affirmed on appeal the largest known award of sanctions against a government in the history of Washington state. Read the decision here.

In the aftermath of the barrage of local, state and national media, the cases from Wenatchee became a leading source for documentaries, studies and new discoveries. Scientists, therapists, criminal justice educators, practicing law enforcement and Pulitzer Prize winning reporters followed the cases for years. For three months, the leading Seattle newspaper covered the story and the 1998 trial on its front page, which resulted in the publication of an award winning series called, “THE POWER TO HARM.”

Our firm represented the family of Zina Linnik – a 12 year-old girl abducted from her backyard by a registered sex offender on the Fourth of July. Our investigation revealed countless government errors that led directly to multiple kidnappings and rapes of children in Pierce County, finally culminating in the death of Zina.

Through the course of our intensive investigation, our firm discovered that the sergeant in charge of issuing an Amber Alert fell asleep while on duty, delaying the issuance of the Amber Alert. We also revealed that the perpetrator had avoided registering as a sex offender for years simply because the City and County had refused to obey a law passed by the legislature requiring government to proactively track sex offenders.

Additionally, we learned that CPS had previously received a report accurately indicating that the perpetrator was living with a child he had purchased – yes, “purchased” – for $2,000 and was sexually abusing her. CPS and Pierce County acted negligently.

Our work on behalf of Zina resulted in changes to the law, and a shake up in the Tacoma Police Department.

VSF was hired to represent a teacher fired by a school district. Most firms presented with this case would have tried to simply work out a deal. We’re not most firms.

VSF was not done. We filed a civil rights action on behalf of the teacher claiming wrongful termination and retaliation. The case resulted in a confidential settlement for our client.

The Seattle Times began an investigation into the actions of coaches who abuse children. In the process, the newspaper sought the records of nearly every teacher in school districts across the state of Washington. VSF obtained an injunction preventing the newspaper from fishing through the private records of good, reputable teachers around the state.

The Seattle Times appealed the injunction all the way to the Supreme Court. Once again, VSF won for our clients in a landmark decision that acknowledged and protected a teacher’s right of privacy.

PROTECTING THE DISABLED FROM DISCRIMINATION

In the case of Barfield v. Kent School District, a blind school teacher was fired from his job because of his disability. VSF filed a discrimination lawsuit against the district and sought injunctive relief to ask a Superior Court to block the district’s effort to terminate the teacher. Using our media contacts, VSF was able to shine a light on the district’s actions, eventually resulting in a confidential but successful settlement for our client.